The Wilderking Trilogy is an exciting new adventure story for children ages 8 to 12. You won't want to miss it!

Courage and a heart for adventure drive twelve-year-old shepherd boy Aidan Errolson. When the bark of the bog owl echoes from the forest across his father's well-tended pastures, Aidan dreams of wild places still untamed and quests not yet pursued.

Aidan's life changes forever on the day Bayard the Truthspeaker arrives at Longleaf with an astonishing pronouncement: it is Aidan's destiny to be the Wilderking, who will ascend to the throne from Corenwald's wildest places. Only the Wilderking can balance his people's civilizing impulses with the wildness that gives Corenwald its vitality. But not just yet. Many trials and adventures will shape the shaggy-headed shepherd boy into the man who can bring the kingdom back to its former glory. 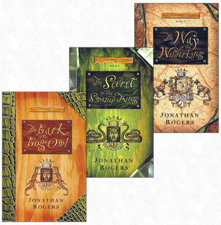